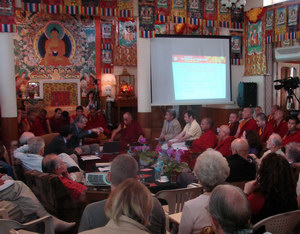 The Mind and Life Dialogues were created as an experiment to determine whether a rigorous scientific exchange could occur between modern scientists and Dalai Lama. The experiment was successful and over the ensuing decade, regular dialogues were organized among the world renowned scientists, the Dalai Lama and other contemplatives.

Currently the Mind and Life Institute is a recognized world leader in emerging scientific investigation of the effects of contemplative practices on brain, behavior, and translation of this data into effective tools to benefit people in all walks of life. Participants at this years conference included: