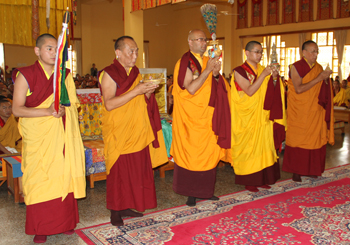 On Saturday afternoon, hundreds of Gyalwang Karmapa’s followers from the Drukpa Kagyu tradition travelled especially from different parts of Himachal Pradesh to join together in offering a Drukpa Kagyu Tenshug for His Holiness in the main shrine room of Gyuto Ramoche Monastery.

Many travelled for hours in order to reach Gyuto; some, from the remote regions of Kinnaur and Lahaul-Spiti, had even travelled for days. From early in the morning, the courtyard below the temple began to fill with their cars, jeeps, motorcycles and hired buses.

The numbers attending the long-life offering swelled to more than a thousand as hundreds more people, who had come for the weekly Saturday afternoon audience, crammed in to the shrine room, or gathered  two and three deep outside on the veranda, peering through the windows and doors.