His Holiness Gyalwang Karmapa arrived in Leh, Ladakh, early in the morning to begin a “Dharma Tour” of the predominantly Buddhist region of India.

Hundreds of Buddhists, including Ladakhis and Tibetans, and visiting tourists were seen lining up since early morning along His Holiness’ entourage route leading up to Chokwang Monastery – keen to catch a glimpse of him. During the brief religious function at the Chokwang Monastery, he was offered Mandrel-Tensum and long life prayers.

His Holiness, upon accepting the offering, said that he was very happy to be in Ladakh for the second time.

Describing the Ladakhis as “devout Buddhist,” His Holiness said he has experienced a feeling of receiving great reverence and love from the people of the region during his first visit. “It is my prayer and hope to visit Ladakh and meet the people of this land many times in future,” he said.

HHK is scheduled to give a short teaching for a Tibetan SOS Village School Choglamsar on the 10th of September. 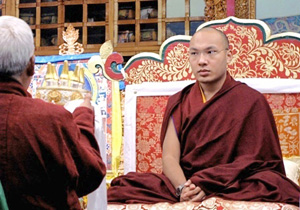