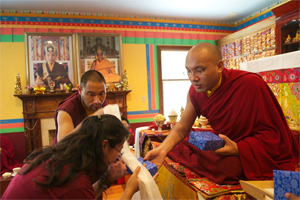 His Holiness the Karmapa departed his North American seat in Woodstock, NY, for a visit to another Dharma center under his spiritual guidance—Karma Thegchen Choling center of New Jersey (KTC-NJ). Arriving at midday in this rural setting in southern New Jersey, the Gyalwang Karmapa soon proceeded to offer the Dharma to a large gathering of disciples.

On the afternoon’s schedule was a Thousand-armed Chenrezig initiation. At the start of the session, His Holiness commented that he had just been cautioning the audience at KTD that it was unwise to offer initiations too easily, yet here he was giving initiation the very next day. However, because the KTC-NJ regularly performs Nyungne, a fasting practice connected with Thousand-armed Chenrezig, the Gyalwang Karmapa said he felt it would be unseemly to refuse their request.

In preparation for conferring the initiation, His Holiness gave a brief but powerful discourse on compassion. Defining compassion as the wish to eliminate suffering, the Gyalwang Karmapa noted that this wish could either be applied to oneself or to others. The wish to free others from suffering is what we ordinarily call ‘compassion,’ whereas the same wish, when directed towards ourselves, is described by the term ‘renunciation.’ Renunciation and compassion are thus two sides of the same coin. Renunciation entails acknowledging our own suffering, and determining to confront and eliminate it. This is a necessary first step towards generating compassion for others, because our recognition of our own suffering forms the basis for empathizing with others’ suffering, His Holiness said. Once we see that we share this basic experience of pain and suffering with all other sentient beings, we can broaden our awareness of their constant longing to be free of suffering.

We are commonly so steeped in self-cherishing, and so occupied with our own private interests that we do not even notice our own egotism, the Gyalwang Karmapa observed. If we do notice it, we generally do not recognize that it is causing us pain and problems. The move from noticing the fact that we are suffering, to confronting the basic causes of our suffering, is a crucial step in eliminating suffering and creating happiness, the Gyalwang Karmapa stressed. His Holiness went on to speculate that this shift in focus from our experience of suffering to the causes of that suffering may be a defining feature of spiritual practice.

After the completion of the initiation, the Gyalwang Karmapa thanked the organizers, led by Lama Tsultrim of KTC-NJ. He continued to comment that the United States is a place where people from all over the world come and live together peacefully in harmony. Because of America’s position of great influence in the world, Americans bear a special responsibility to work not only for peace and harmony in their own country, but also to work sincerely and selflessly to bring about peace and harmony throughout the world.

Following the Dharma transmission, KTC-NJ held a banquet in His Holiness’ honor. A group of three Tibetan singers provided the evening’s entertainment. At the close of the event, one of the volunteers was handed the microphone, and asked if she could say a few words on behalf of all the many volunteers who had toiled to make the day’s activities possible. “We have done so little, and been given so much,” she said. “I feel there is nothing we could ever do that would match the kindness that the buddhas and the spiritual masters show us.” Her voice choked with tears as she expressed a sentiment that was surely shared by many present. On that heartfelt note, the event concluded and the crowd dispersed slowly into the balmy July night, buoyed by their long-awaited encounter with this supremely kind spiritual master.