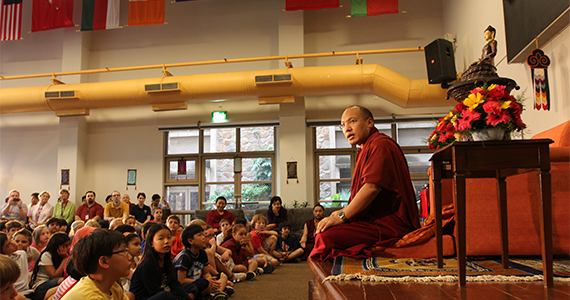 It was with evident delight that the Gyalwang Karmapa spent the afternoon of 4 October interacting with students, parents and staff at the American Embassy School in New Delhi. With this being his fourth such visit to the school, the Gyalwang Karmapa personally remembered many of the young students from previous years as they greeted him and approached for his blessings.

On his arrival at the school, a student first interviewed the Gyalwang Karmapa for a class project, asking him questions about his childhood and escape from Tibet. He then toured the school’s science labs, dropping in on an astronomy class and examining the telescope equipment.

Next the Gyalwang Karmapa headed to the school’s assembly hall, known as the Peace Hall, which was packed with 4th and 5th graders eagerly awaiting his arrival. The students, aged from 9–11 years, sang two songs for him on the theme of ‘shanti’ or peace. They later listened raptly as Ani Choying Drolma, the internationally renowned ‘singing nun’ from Nepal, performed live for them.

The young children asked the Gyalwang Karmapa a series of simple yet profound questions, seeking his wisdom on topics such as preserving the planet, preventing bullying, and finding inner peace.

“How can we be more mindful?” asked a young student.

In response the Gyalwang Karmapa then skillfully devised a ‘mindfulness game’ for the children as a way to train in becoming more mindful. He invited them to take a single day, and to deliberately pay more attention to their actions over the course of that entire day.

“For the mindfulness game, in the morning you can make a plan,” he explained. “When you follow that plan you can take a white stone and put it in the ‘mindful’ column. And when you’re not being mindful, you can then take a black stone and put that in the ‘unmindful’ column. Then at the end of the day you can keep score and see how many levels you get through. You can examine yourself, and that way you will know how mindful you are being.”

In response to a question on how to be happy, the Gyalwang Karmapa replied that it was very easy. Children are very happy when they get something, he explained, because they are easily satisfied.

“So I think the real spiritual instruction for being happy is to be satisfied with what you have. If you are, then that is the basis of being happy, and that is also the key point about being happy.”

Later, after many of the students had left school for the day, the Gyalwang Karmapa continued his interactions with parents and staff who also sought his wisdom on wide-ranging topics.

Continuing with the theme of mindfulness, the Gyalwang Karmapa elaborated further. Mindfulness is not something that we only do when we have a sudden emotional situation, he began. “We need to always, continually notice what is happening in our minds. We can say that being mindful is being in the present moment.”

“Normally we spend all day long working and doing things, and then when we come to the end of the day we don’t really know what we’ve done,” he said. “We don’t feel like we’ve tasted the flavor of anything that we’ve done, and that’s because we haven’t been in the present moment. So the feature of mindfulness is that we are being in the present moment, and are able to experience and taste it.”

He responded to a question on how artists can help keep their creative spirit alive.

“I think that drawing is actually really connected with mindfulness,” he said, “because as we’re drawing then our minds go along with what we’re drawing. When the mind and the drawing go along together, then our minds become more colorful, and our minds also have more beauty. I feel that this brings some peace.”

Late in the afternoon a group of 3 giggling young elementary school students snuck back into the hall and approached the Gyalwang Karmapa for a blessing—their second that day. ‘Again!?’ he admonished them jokingly, before gently placing the khatas around their necks. Their delighted peals of laughter echoed throughout the Peace Hall as they ran away home, filled with the Gyalwang Karmapa’s blessings.