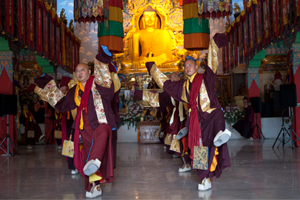 As the Tibetan year draws to a close, Tsurphu traditionally offers a special ritual known as Gutor. This ten-day long ritual is dedicated to the Great Protector of the Karma Kagyu, Gonpo Bernakchen, (Mahakala in Sanskrit). This year’s ritual will be very special as, for the first time since the Gyalwang Karmapa came to India, the complete Tsurphu Gutor Ritual will be offered, including ritual dances, known as Cham in Tibetan, performed by monks from seven Karma Kagyu monasteries in Nepal and India: Rumtek, Ralang , Mirik, Benchen, Phodong, Old Rumtek, and Old Ralang. An audience of about one hundred devotees clustered together in the chilly shrine hall at Tergar Monastery to watch an all-day rehearsal of the Cham.

The dancers wore partial costume – jackets decorated with rich brocades, white, embroidered Tibetan boots, topped with brocade, and, swinging from their belts, a golden brocade chab-shu. The chab-shu , a square bag holding a small water-container, represents the water pot which fully ordained monks traditionally carry. The cold climate in Tibet forced them to wrap the water pot in cloth to prevent the water from freezing. Over the years, the pot became smaller and the cloth transmuted into the chab-shu.

More than forty dancing monks circled the shrine hall, bodies swaying, arms rising and falling, as they rehearsed the routines under the eagle eyes of the Gyalwang Karmapa and Gyaltsab Rinpoche. The dances were accompanied by the susurration and clashing of cymbals, deep, resonant Tibetan chanting and the insistent beat of the largest temple drum.

The dances began with the Ground Purification Dance and included Protector Dances, a Skeleton Dance, a Yak and Deer Dance, the Monkey Protector Dance, and the famous Black Hat Dance. The dances involved a range of tempos and footwork and hand and body gestures. The Deer flourished their antlers and bowed to the Buddha, the Skeletons jiggled around, the Monkeys jumped up and down, arms dangling at their sides.

Some dances were very vigorous: lively leaps, hops and vigorous jumps and squats. Others were more sedate, as if in slow-motion: bent legs raised almost to waist height, foot turned outwards, followed by a ponderous step or two and a slow twirl. The monks’ faces were strained with concentration, and, in spite of the chill in the hall, the dancers could be seen surreptitiously wiping the sweat from their faces.

As the rehearsal proceeded, three sparrows dived and whirled above the dancers. The little birds flitted from thangka to thangka or perched momentarily on the great mandala offering set on the table at the front of the shrine hall. Above the table, on the podium, a life-like statue of the 16th Gyalwang Karmapa sits impassively on the throne.

The Gutor will start on the 14th February and the Cham dances will be performed on the 20th. At that time, the monks will don masks and full costume, and it is possible, though not yet definite, that the Gyalwang Karmapa himself, Kyabje Jamgon Kongtrul Rinpoche and Kyabje Gyaltsab Rinpoche will join in parts of the Cham, which would transform the ceremony into an even more unique event.