An audience approaching 2,000 people shared four extraordinary hours today with His Holiness, as the teachings on Nagarjuna’s “Letter to a Friend” continued into their second day. His Holiness’ exceptional range as a teacher was on full display as he mixed formal commentary on the verses of the text, with heart advice for working with difficult emotions, intermittently lightening the mood with humorous anecdotes that had the entire assembly hall ringing with laughter. His Holiness spoke directly to students’ minds and hearts, and many were visibly moved when he described his own thoughts on what it means for students look to him as their root lama.

In encouraging students to confront their own afflictions, Gyalwang Karmapa paid particular attention to stinginess, anger and pride. Speaking of anger, His Holiness pointed to the irony of the fact that when we are angry at our enemies, we are actually accomplishing their aims for them. This is so because anger most harms the person who harbors it in their mind, and since our enemies are seeking to harm us, our anger has already done their work for them.

However, while urging students to make sincere efforts in working with their difficult emotions, His Holiness cautioned that it is important not to become discouraged when we commit errors or find that we have afflictions arising. Had we arrived in this life without ever having committed any errors or succumbed to our afflictions previously, then it might be surprising or disheartening to suddenly find ourselves doing so in this life, he said. But since we come to this life with a personal history of countless lifetimes in which we have been overwhelmed by afflictions, it is already commendable that in this lifetime we now recognize our faults as faults, and then work to change them.

More detailed teachings will be made available very soon. 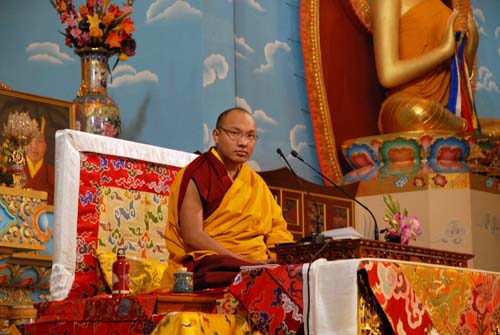