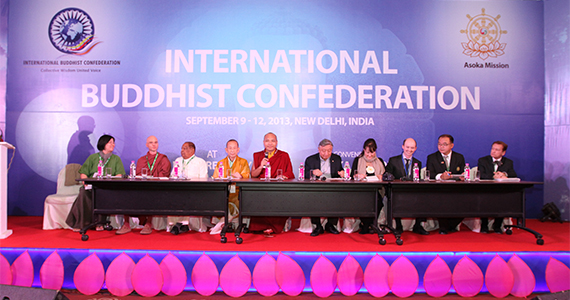 On the third day of the International Buddhist Confederation conference in New Delhi, 11 September 2013, the Gyalwang Karmapa shared his thoughts with Buddhist leaders on several key issues.

First speaking during a panel discussion on ‘Changing Times: Buddhism in the 21st Century’, he told the delegates that the environment is one of the most important issues in the 21st century world and pointed out that environmental problems are very strongly connected with our own behaviors.

The delegates later broke into various Working Groups and the Gyalwang Karmapa co-chaired the group on Environment and the Natural World, together with Simon Sharpe, head of the Global Strategic Impacts Team in the Climate Change and Energy Department of the British Foreign Office. After discussing wide-ranging environmental issues the group agreed on the need for a dedicated environmental conference for Buddhist leaders.

In a departure from the planned schedule, the Gyalwang Karmapa then left the Environment Working Group and headed specially over to the Full Nun’s Ordination Working Group, joining Co-Chairs Jetsunma Tenzin Palmo, Abbess of Dongyu Gatsal Ling Nunnery in India, and Ven. Dhammananda, Abbess of Wat Songkhammakalayani Temple in Thailand.

He then went into technical detail on the methods with the group, and told them that his own preferred method would be for Bhikshus from the Mulasarvastivada tradition and Bhikshunis from the Dharmaguptaka tradition to confer the ordination together. This would be considered a faultless and perfect Bhikshuni ordination, he emphasized.

Having made it clear that reinstating Bhikshuni ordination in the Tibetan tradition is indeed possible, the Gyalwang Karmapa told the group that what is needed now is for nuns to be educated and to develop confidence and initiative. He also told them that during the upcoming Ārya Kshema Winter Dharma Gathering for Kagyu Nuns in Bodhgaya he will teach the nuns daily and speak about the purposes and needs of the Bhikshuni ordination.

Once nuns are educated and have built up their confidence to request these Bhikshuni ordinations they could happen very quickly—perhaps even within a few years, he said.

The Gyalwang Karmapa’s proactive involvement in the Full Nun’s Ordination Working Group at the International Buddhist Confederation was met with an extremely positive reaction from those gathered, who expressed their gratitude, appreciation and delight at his strong support.