Gyalwang Karmapa Presides over a Day of Chö Puja 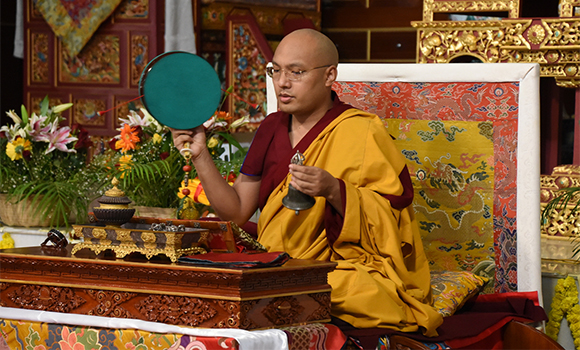 February 2, 2016-Tergar Monastery, Bodh Gaya, Bihar, India
Following the final day of teachings at the Arya Kshema Winter Dharma Gathering, the Gyalwang Karmapa presided over a full-day Chö puja with all the participating nuns. The text that was chanted is called Chö: A String of Jewels and was composed by the 3rd Karmapa Rangjung Dorje.

Since the time of the 3rd Karmapa, Rangjung Dorje, who wrote the first commentary on Chö and who also compiled the text of this puja, the Karmapas have had a strong connection with the Chö practice. Historically they are holders of the direct Chö lineage, based on the Indian Buddhist deity Prajñāpāramitā, who is known as both the mother of all the Buddhas and the embodiment of wisdom.

Chö, which means “to sever or cut” in Tibetan, ultimately aims to cut through the ignorance of self-grasping that is the root of all our suffering, using the wisdom that realizes emptiness. It is renowned among the eight practice lineages of Buddhism as being the only lineage established by a woman, the great female master Machik Labdrön and the only one to pass from Tibet to India. Female practitioners have been known to traditionally excel in Chö practice.

Starting at daybreak long lines had formed outside the shrine entrance of people eager to participate in the puja. Many monks and lay people lined the outer and back rows of the shrine, as well as filled the space on the veranda surrounding the shrine. There were also many people in attendance clothed in the white and red ngagpa robes of lay tantric practitioners. In total it is estimated around 1000 people were in attendance.

The day was full of color and the beautiful melodies of the Chö. The Karmapa sat on the central throne, wearing his yellow outer monastic robe (chögu) and presiding for the entire day as Dorje Lopön, or vajra master. Hundreds of nuns sat in rows of raised platforms and carpets facing each other, also wearing their yellow outer robes. Nearly all the nuns also played the special Chö drums and bell used in the practice, filling the space with the green circles of the turning drums as well as the rhythmic sound. At points in the puja the haunting sound of kangling horns reverberated through the air, evoking the severing of gross attachment to the physical body that informs this practice.

As with all the practices performed during the Arya Kshema Winter Dharma Gathering, the nuns took the key roles in the puja, such as the chant masters, and the musicians playing the large puja drums and other instruments. During the afternoon’s feast offering, a group of nuns, facing the Gyalwang Karmapa and each holding up a feast offering, offered him a song.

The ritual concluded around 5pm and created a perfect preparation for the arrival of Jamgon Kongtrul Rinpoche who came soon after. Several lines of nuns, monks, and laypeople lined both sides of the road and the pathway into the shrine. When he came, three nuns skillfully played the gyalings horns to lead the entrance party past many people holding katas to joyfully greet this precious master.