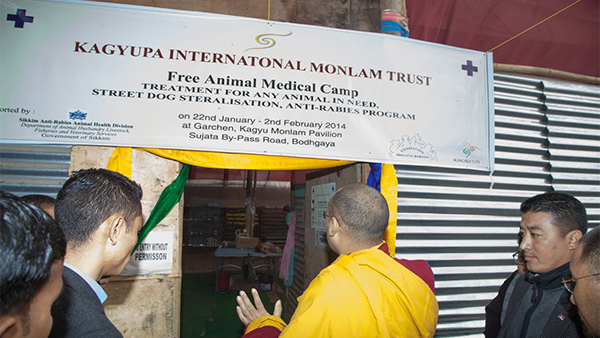 Gyalwang Karmapa took a short break this morning from his teachings on Gampopa’s Jewel Ornament of Liberation in order to  inaugurate the first ever Kagyu Monlam Animal Camp, which opened here in Bodhgaya today. Having been greeted by the staff, he toured the facility, watched dogs being prepared for surgery, and had a glimpse of the operating theatre, before returning to resume his teachings to the nuns attending the 1st Arya Kshema Winter Dharma Gathering for Nuns.

Spread across the fallow ground between the Monlam Pavilion and Tergar Monastery, the Kagyu Monlam Animal Camp comprises two parts. Outside, near the main gate to the pavilion, stands the outpatients’ reception, where local people can bring domestic animals and pets of all sizes for examination and non-surgical treatment. Inside the grounds, the former Garchen kitchen tent has been transformed into a holding area for stray dogs, an operating theatre, where four vets can work simultaneously, and a recovery area.

The staff consists of six qualified veterinarians, nine para-vets and dog-catchers, and two van drivers. A major part of the team’s work is a street dog ABC-AR programme [Animal Birth Control- Anti-Rabies], as recommended by the W.H.O. (World Health Organisation) as the only method of controlling rabies infections in people. Each morning some of the para-vet team leaves at around 6.00am to collect stray dogs and bring them to the camp. At 8.00am surgery starts, and the para-vets go back to collect more dogs. The sterilization programme is aimed at both male and female dogs, with the goal of spaying or neutering between twenty to thirty dogs each day. At the same time, the dogs will be vaccinated against rabies, treated for parasites, and given antibiotics and post-operative painkillers. An ultrasound is used on all females to check that they are not pregnant before they are operated on.

In addition, the vets will treat a range of other conditions requiring surgery such as severe infections, prolapses, injuries, eye disease, cancers and so forth.

After the 24th, the camp will begin an outreach programme to nearby villages where the vets will set up field clinics to treat all animals, strays, pets and domestic animals such as cows, goats, and horses.

The staff are all highly experienced in the field, and have been involved in successful ABC-AR programmes.  Drs Thinley, Diki and Shams and many of the para-vets come from the Sikkim Anti-Rabies Animal Health (SARAH) Division of the Department of Animal Husbandry, Livestock, Fisheries and Veterinary Services, which has been carrying out a very successful ABC-AR program across the Himalayan state of Sikkim. Previous to their intervention, the government had no choice but to shoot over a thousand dogs every year to control the population. Now, the vast majority of dogs are sterilised and vaccinated leading Sikkim to become the first rabies free state of India. For the past 2 years, the SARAH team has acted as a training institute, teaching many Indian veterinary personnel from other states the advanced surgical, nursing and humane animal handling skills required for a successful ABC-AR programme. This was carried out under the auspices of the Animal Welfare Board of India and through the Vets Beyond Borders “VetTrain” program.

The Foundation Brigitte Bardot (FBB) has supported the SARAH program since its inception. FBB support hundreds of animal welfare programs around the world and has generously become the main sponsor of the Monlam Animal Camp, in co-operation with Kagyupa International Monlam Trust. www.fondationbrigittebardot.fr

Vet and para-vet volunteers from the Tibet Charity Animal Care Centre, and Dharamsala Animal Rescue, both animal welfare NGO’s from the Dharamsala area, are also supporting the animal camp.