Gyalwang Karmapa on Protection of Wildlife and Waste Conservation

The morning began with a question and answer session.

The main topic for the morning was waste management.  Dr Anjan Kumar Kalia (Him Renewable Energy Consultants) gave a clear and comprehensive presentation on waste management. He first explained the different types of waste and highlighted that although waste could be a problem it was also a wealth.

His then focused on vermi-composting which used kitchen waste,    and bio-gas, which is produced from animal and human waste.  The session concluded with questions from the audience.

The overall theme for the afternoon was Wildlife Protection

The Science of Conservation

Dekil Chungyalpa began the session and talked about bio-diversity, and Gyalwang Karmapa translated into Tibetan. She explained how the term biodiversity refers to species, gene pool, ecosystem and ecological  processes.

Human activity has had a devastating effect.  Scientific evidence shows that, as modern human beings spread across the globe, many species became extinct. In the past it was due to hunting, more recently deforestation and destruction of habitat.

Finally, Dekil explained how conservationists worked to save ecosystems and species.

Tenzin Norsang from the Wildlife Trust of India talked about how wildlife was being destroyed by poaching.

He began with tigers.  The tiger population on the Indian sub-continent is declining rapidly and the blame lies with the illegal wildlife trade. Tigers are being poached from reserves for tiger parts which are then smuggled out of India to be used in medicine and charms.

The chiru – a wild antelope in Tibet- is being killed by professional hunters for its soft, underbelly fur which is made into very expensive shahtoosh shawls.

One-horned rhinos in Assam are being killed for their horns.

Tenzin Norsang explained that the Indian Wildlife Protection Act threatened fines and imprisonment to those who broke the law. At the 2006 Kalachakra in Amaravati, His Holiness the Dalai Lama had spoken out against people wearing fur from endangered species, and this seems to have helped, but in 2009 the number of tigers killed had risen.

Finally, he described work to protect wildlife such as creating elephant corridors, and asked everyone to respect animals.

The Future: Destruction or Protection?

The final presentation was given by the Gyalwang Karmapa who spoke about the importance of biodiversity. Biodiversity still exists and needs to be preserved. He read some Tibetan verses to illustrate how In Tibetan culture wildlife is often referred to and praised.

His Holiness paid particular attention to the role of the tiger in the ecosystem because so many monks had raised questions during this and the previous conference about the value of protecting such a terrible predator! Perhaps the world would be better off without the tiger. 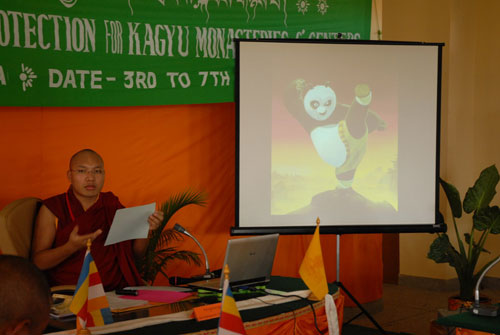 Forests take thousand of years to form and are a rich ecosystem. Protecting the forests protects all the living beings within the ecosystem. The tiger is king of the jungle and protects the forest. The tiger regulates his behaviour. He eats 18 to 20 kilos of meat at a time, when he is hungry.  If he kills a water buffalo, he can’t eat all of it at one sitting, but he will return again and again. He never wastes anything. Usually a tiger chooses his kill carefully from the sick, the old and the weak in the herd. Thus he has a role in maintaining the health of the herd.  Though the tiger looks fierce, his life is short, perhaps between ten and fifteen years only in the wild. Humans, on the other hand, aren’t fierce but they live a long life and hunt a lot! The tiger has a range of 10 – 15 kilometres of forest, so he is preserving that area of forest.

Many people think the tiger is no good because it kills a lot. Similarly, in water, the shark is the tiger of the seas. Interest in sharks is growing because they are frightening, and people think the ocean would be better off without them. But by eating lots of fish, sharks maintain a balance in the ecosystem. Both tigers and sharks play important roles in their respective ecosystems.

Gyalwang Karmapa then explained how the food chain works. Plants need soil, sun, and water to grow. They are eaten by deer and rabbits, who, in turn are eaten by omnivores such as bears or carnivores such as the tiger The tiger dies and is eaten by the vulture. The vulture dies and rots and is eaten by the worms and insects who return the nutrients to the soil, so that the plants can grow. This cycle is like the cycle of samara, with both good and evil.

We regard our human life as precious, but according to biodiversity, all life in an ecosystem is precious.

There is a story of how the Lord Buddha in a previous life offered his body to a hungry tigress. If tigers are not important, why did Buddha offer himself to the tigress?  She was starved and sick and she didn’t even have the energy to kill him, so Buddha cut his arm so that the tigress could drink his blood. Survival is very important to everyone, including tigers, and that’s why Buddha offered his life to save the tigress and her cubs.

In Thailand there is a place where monks and tigers live together. It began when a hunter killed a mother tiger and gave the cub to the temple. That cub died. Then the monks started rescuing orphaned cubs, because the South Chinese tiger is very rare, and now the monastery has 17 tigers. However, the monks are now trying to reintroduce the tigers into their natural forest habitat. Buddhism teaches that everything has been our mother and father. These monks have shown love to these mother sentient beings and so they have survived.

It is human nature to try to discover new things and to get benefit from everything. In Buddhist teachings, every sentient being wants happiness and wants to avoid suffering. The tiger eats meat but wants happiness. The earthworm also wants happiness, but we humans consider our own  happiness to be most important.

His Holiness showed a slide of a tigress carrying her young cub carefully in her mouth, to contrast the image of the tiger only as a fierce killer.

He then talked about the food pyramid. The tiger was the top predator, but damage lower down the pyramid which threatened the top. Because of global warming the tiger was being forced to change its natural habitat. When the tiger changes its habitat it has a negative effect on the whole environment.

All living things are interconnected and interdependent. What affects one, affects all in some way. All sentient beings have the right to live.

Presentation by His Holiness to the Nepal Buddhist Federation

The Gyalwang Karmapa has decided to create a website which will feature the work of the Kagyu environmental protection movement and detail environmental work and development in Kagyu monasteries and nunneries.

The website is in the final stages of preparation, so conference members were asked to contribute their ideas and views.