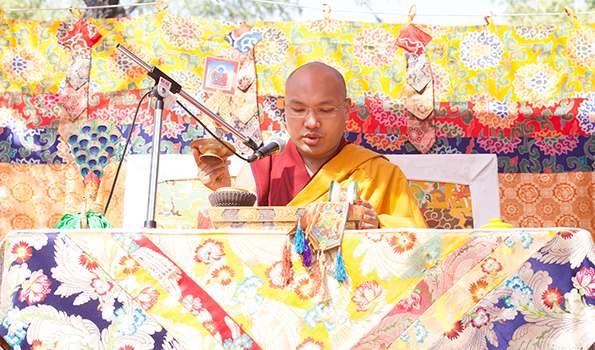 The sun shone in a clear blue sky as many from New Delhi’s Tibetan and Himalayan communities gathered in the lush grounds of the Buddha Jayanti Park.

In the crisp winter morning they followed winding pathways over green fields and small streams to cross the park—which was created in celebration of the 2,500th anniversary of the Buddha’s Indian birth—towards a special outdoor arena, beside the park’s iconic golden Buddha statue. A stage was set with the Gyalwang Karmapa’s throne, while a translucent red silk canopy floated in the gentle breeze overhead.

The Gyalwang Karmapa was once more requested by the Himalayan Buddhist Cultural Association to offer empowerment and teachings, in an annual gathering of Delhi’s Tibetan and Himalayan peoples that has taken place for the past 5 years.

On his arrival at the park the Gyalwang Karmapa was escorted through the grounds with traditional gyaling horns and clouds of fragrant incense, first pausing at the sacred golden Buddha statue to prostrate, kneel, and offer a white silk khata.

Lama Chosphel Zopa – who is President of the Himalayan Buddhist Cultural Association, former Member of the National Commission of Minorities and former Vice-Chairman of the National Commission of Scheduled Castes and Tribes of the Government of India – welcomed the Gyalwang Karmapa and explained that they had requested him to offer a Medicine Buddha empowerment, as well as to give a short introduction to the Buddha dharma.

“We’ve been Buddhists for generation after generation, so I’m not sure why you want me to introduce you to Buddhism!” the Gyalwang Karmapa joked to the largely Tibetan and Himalayan crowd, to laughter all around.

And yet, he then skillfully proceeded to teach those gathered how to deepen the natural faith and trust in the Buddha dharma that most present had enjoyed since their birth.

Speaking in Tibetan, his words were also translated into Hindi by Roshan Lal Negi for the benefit of all the Himalayan peoples present.

“Generally speaking, many Tibetan and Himalayan people have a strong foundation of faith, trust and belief in the Buddha dharma. This is very, very good, and gives you 50-60% of what you need. You already have a large part, and if you just add a few percent more through your own efforts to gain education, then you have the opportunity to become extremely strong practitioners,” he told those gathered.

He explained that they were already very fortunate to have this quality of faith and trust in the Buddha dharma, which is an important foundation—and yet, on its own, this is not enough.

“What’s left now is to study. We need to study how it is we should practice the dharma – if we do that, we can be 100% practitioners and our practice can be 100% fruitful.”

“Even though we’ve a long history of engagement with Buddhism and being followers of the Buddha, we’re not familiar with or adept at applying the essential points of Buddhism within our lives. This is quite sad.”

He observed that across the Himalayas there was traditionally a lack of emphasis on education—both in general terms, as well as in actual study of the Buddha dharma. And yet, in modern times schools were now opening up even in remote places.

“Young people can seize these opportunities for education,” he said. “But, we don’t just need education in general, but to also place emphasis on dharma study as well.”

The Gyalwang Karmapa then taught how faith and trust in the Buddha dharma have the power to lead our minds in a positive direction, and can spur us on through difficulties.

“Many of us here have escaped to India from Tibet, and if we look at the experience of escaping from Tibet we can find a very clear example of the power of faith. Our faith was an important condition that allowed us to arrive here. The path we had to cross to reach India from Tibet is fraught with difficulties. In order for us to be able to face those difficulties—and even to set out on the voyage—it was our faith that allowed us to do so. If we had wavered, lost our faith, lost heart, we could have not undertaken the journey. So this is a vivid example of where we can see the power of faith at work.”

He turned to his own decision to flee Tibet as a direct, personal example of the power of faith.

“By making the decision to come, I could recognize it would be beneficial. But if I were only using my brain to identify the risks and assess the potential dangers, this alone would not have given me the strength to come. We need to have faith in the benefits of something, and to have faith and trust that we’re going to be able to do it. We need faith to even start out, and along the way faith keeps us firm when obstacles arise.”

The Gyalwang Karmapa offered the Medicine Buddha empowerment, and skillfully conveyed the healing power of the Buddha’s blessings. He urged those gathered to take care of their own health, instructing them that with a healthy body and a healthy mind, happiness will naturally arise.

Finally, he expressed how happy he was that all the members of the Tibetan and Himalayan communities in Delhi had come together, like a large family.