Gyalwang Karmapa’s booklet, Environmental Guidelines for Karma Kagyu Buddhist Monasteries, Centres and Community went on sale at the end of Kagyu Monlam. So far the booklet has been published in English and Chinese; the Tibetan edition should be available in February/March 2009. His Holiness briefly described the booklet and his own deep concerns about the environment on the second day of the Western teaching.
He explained how he had first spoken about environmental concerns at the end of the 25th Kagyu Monlam. He had mentioned his worries again in his concluding speech at the 26th Kagyu Monlam. He then detailed the five sections of the booklet, by highlighting the destruction of forests in India and Tibet, the danger to water supplies, the protection of wildlife, the need for waste management, and the threat of global warming and climate change.
He admitted the culpability of some monasteries in cutting down trees to be sold as timber. This had to be stopped and those forests replanted.
Glaciers and snow melt in the Himalayan region are the source of water and thereby the source of life for millions of people throughout Asia, rivers from Tibet flow to China, Burma, India and Pakistan, so it was essential to both protect the source and prevent the rivers becoming polluted.
There had been some advances in the area of wildlife protection. A few years ago in Tibet it was the custom to use tiger and leopard skins and other animal skins for decoration, but since His Holiness the 14th Dalai Lama condemned this practice, it had mostly stopped, and this had helped prevent the extinction of these animals in Asia. For those people who still ate meat, Gyalwang Karmapa emphasized the need to think seriously about reducing the amount of meat they eat because the additional resources needed to produce meat had a direct effect on the environment.
He explained that monasteries did not have a training or culture in waste management so by giving them special training so that they could lead by example, he hoped that knowledge and practice would spread into society at large.
As to the crisis of climate change – especially in the Himalayan regions where it is happening up to five times more quickly – it was a change which would affect everybody in the world.
The next stage of implementation of his proposals will be a conference in mid-March for abbots and Rinpoches. Each monastery will be asked to appoint an environmental protection co-ordinator, and these people will receive additional training.
A PDF of His Holiness’ Environmental Guidelines Booklet can be downloaded here. 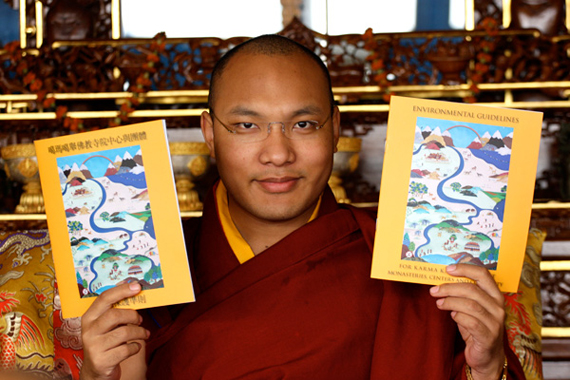