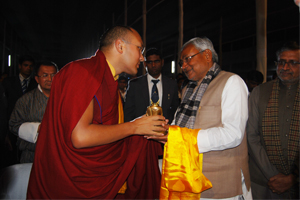 The Gyalwang Karmapa participated today in the opening of the Bodh Mahotsava 2012, a three-day cultural festival commemorating the 2,600th anniversary of Buddha Shakyamuni’s enlightenment here in Bodhgaya.

In the afternoon, His Holiness inaugurated a ceremony in which Lord Buddha’s relics were paraded through the village atop an elephant. Upon arriving at the Mahabodhi Society of India, the Gyalwang Karmapa first said prayers before the image of Lord Buddha. Next, he ascended to a lofty podium, which he shared with Bihar Minister of Tourism, Sunil Kumar Pintoo. In company with the minister, the Gyalwang Karmapa ceremoniously handed the precious relics of Lord Buddha to a senior monk seated atop a lavishly adorned elephant. As the relics made their dignified way through Bodhgaya, they were escorted by a long and colorful procession of monks, dancers, musicians, delegates from around the world and around India, as well as more elephants and camels.

Festival activities continued in the evening when the Gyalwang Karmapa was invited to join the Chief Minister of Bihar, the Sri Nitish Kumar, Deputy Chief Minister  Sushil Kumar Modi, as well as a host of ministers, including the Ministers of Tourism, Power, Food and Scheduled Tribes departments of the Bihari government. The event included a gala cultural programme with song and dance performances by troupes from Thailand, Bhutan, Sri Lanka, Ladakh and Sikkim, as well as speeches by the Gyalwang Karmapa, the Chief Minister and Deputy Chief Minister. Held on the Kalachakra grounds, the programme attracted over 8,000 people, including representatives of various embassies, national delegates and local attendees.

In his speech, the Gyalwang Karmapa noted the substantial progress that has been made in improving material conditions within Bihar. He spoke of the importance of education, and observed that Lord Buddha spent his life after enlightenment educating all those he encountered, from every walk of life and every caste without discrimination. The education that Lord Buddha offered was not aimed at external development, he observed. Rather, it was designed at instructing people to recognize the true causes of lasting happiness and to eradicate the ignorance that is our major obstacle to happiness. After Lord Buddha had dispensed his teachings in all directions, the Buddhadharma spread and took root in neighboring countries. Now, the Gyalwang Karmapa stated, we have reached a wonderful historical moment where those cultures that had been the beneficiaries of Dharma from India now had the opportunity repay that kindness by offering the Dharma back to India.

The Chief Minister, Shree Nitish Kumar, also addressed the audience. He spoke of his experiences attending the recent Kalachakra Puja by His Holiness the Dalai Lama, in which the Gyalwang Karmapa also participated. He said that he had observed the discipline of the Buddhist audience of hundreds of thousands sitting for hours on end as they listened attentively to the talks. When he wryly commented that it would be quite a feat to get so many Biharis to sit still for so long, the crowd erupted in laughter.

The second and third day of the festival will focus on Bihari and Indian cultural contributions, respectively. The event was jointly organized by the Bihar government’s Department of Tourism, the District Administration of Gaya and the Bodhgaya Temple Management Committee.
click for video