Gyalwang Karmapa Hosts a Losar Feast for All 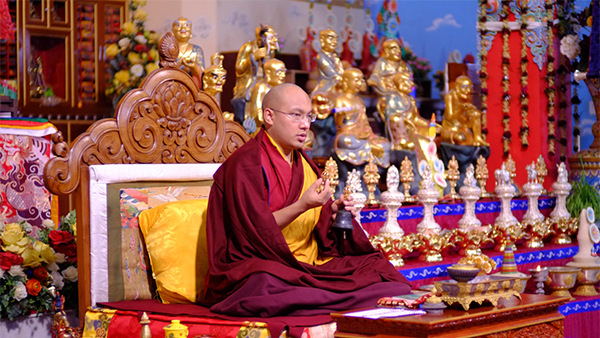 The second day of the Tsurluk Losar festival began with the ritual of The Sixteen Arhats in the main shrine room. The  Sixteen Arhats [Tib. Neten Chudruk], also known as the Sixteen Elders, were personally chosen by Shakyamuni Buddha from amongst his disciples.  He asked them to remain in the world in order to protect the Buddhist Dharma for as long as beings are capable of benefitting from the teachings.

As His Holiness had explained during Kagyu Monlam, the Sixteen Arhats are invoked in order to help the Dharma flourish.  “The Dharma teachings are the sole medicine, the sole salve for all sentient beings. It’s the only medicine to eliminate the sufferings of sentient beings, ”he commented.

In the context of the Arya Kshema Winter Dharma Gathering for Nuns, there was special emphasis  on the role of the nuns in the flourishing of the Dharma and  an aspiration that the community of nuns would also flourish.

Yet again, from early morning His Holiness had supervised the transformation of the temple until everything was to his satisfaction.  The Losar offering of kabse remained, but the shrine from the long-life ritual had been replaced as had the golden throne. Now statues of the sixteen arhats had been brought down from their positions on the ledge above the central aisle and placed on two new altars, one on either side behind the usual wooden throne.  On the left-hand side altar were displayed the eight auspicious symbols placed in gilded vases, and the right-hand side altar held the seven signs of kingship crafted in silver.

After the conclusion of the morning ritual, everyone was invited to join the Gyalwang Karmapa for a special Losar lunch at the Monlam Pavilion. A wide selection of vegetarian food sourced from several restaurants in Bodhgaya was provided. The stage had been converted into a dining area where His Holiness sat with selected guests.  The bulk of the nuns and laypeople sat on cushions in the main arena and some chose to collect their food and sit outside in the sunshine.

In the afternoon His Holiness went to the Root Institute, a local Dharma centre.