Gyalwang Karmapa on the Universe, Ecology and Buddhism

Many of the monastic representatives have not had the chance to study modern science so Gyalwang Karmapa began by giving a slide-show presentation of scientific cosmology in which he demonstrated the vastness of the universe and the minuteness of earth and the solar system within it. 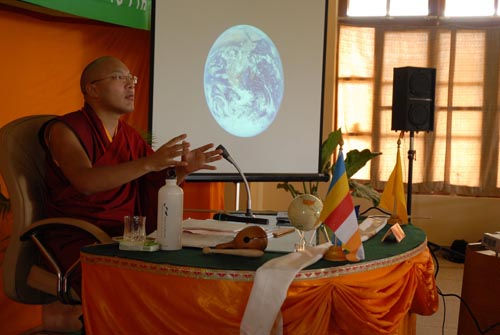 Using earth as his starting point, he illustrated its position as the very small planet, third from the sun, comparing its size with Jupiter (1114 times bigger) and the sun (900 times bigger than Jupiter). From that he moved to the solar system’s place in the Milky Way galaxy, explaining the need to use  light years  to measure vast distances, and, then, finally, he described the universe, and demonstrated how even something as vast as our galaxy (100, 000 light years across) was minute when compared with the universe itself.  By this stage everyone was staggering at the impossibility of even conceiving of such vastness. His Holiness commented that details about the vastness of the universe and even about so-called black holes, could be found in Buddhist scripture.

Gyalwang Karmapa continued by highlighting the specialness of the earth. Light from the sun takes eight minutes to reach us; if it took either a minute longer or a minute less, life on earth would not be possible.  Within the vast universe, so far, scientists had been unable to find another planet which supports life.

He explained how the moon and sun’s gravitational fields influence water on earth – the tidal oceans- and how, of all the  water on earth, only 3% is drinkable, the rest being saltwater, and of that 3%, only 1% is available: the rest is stored in ice at the poles including the ‘third pole’- the Himalaya region, and especially Tibet. Tibet is the source of most of the drinking water for much of Asia.

Gyalwang Karmapa then discussed the position of homo sapiens.  He used a diagram to illustrate how the earth was more than 4 billion years old and there had been many life-forms previously, such as the dinosaurs, but homo sapiens was a recent arrival approximately 200,000 years ago. Yet, during that time, homo sapiens had had a great impact on the planet.

Humans  have the tendency to want too much. If somebody gets a television, everybody else wants one. Nowadays people think they need a television and a mobile phone, and soon everyone will want a car. It was human behaviour which had created greenhouse gases, and which was putting excessive pressure on,  disrupting and destroying ecosystems.  Humans affect their environment and the scale of the demands made on the environment has  increased dramatically to devastating effect. In China, in the olden days, fishermen trained cormorants to catch fish for them, one-at-a-time. Nowadays great trawlers harvest the oceans and fishing stocks are becoming irreversibly depleted.

In Madhyamika philosophy we are taught to question the fundamental nature of things. Modern science has reached similar conclusions to Buddhism, that everything is interconnected and interdependent; what  is sometimes called ‘the butterfly effect’. Thus it was very important that we consider the effect  of our actions  on the environment, and that learn  to live with less.

This earth is like a grain of sand in the vastness of the cosmos, but it is our only home and we have nowhere else to go. There is no point apportioning blame. We have to work together to preserve and protect it.

The Ven.Thubten Jigdrel gave a short presentation on the work of this  non-sectarian Buddhist organisation, which  includes ordained and laypeople  working together. The N.B.F. has worked to establish a plastic-free environment and has held a  seminar on environmental education and the preservation of wildlife.

His Holiness gave a tongue-in-cheek exam, to check up on what people remembered of the science from the morning session.