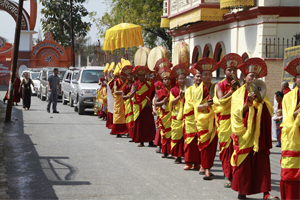 His Holiness the 17th Karmapa, Ogyen Trinley Dorje, departed Delhi today for Varanasi, after successfully concluding the three-day Karmapa 900 Delhi commemoration in the nation’s capital. His arrival was eagerly anticipated at Vajra Vidya in Sarnath, the monastery of the Gyalwang Karmapa’s principal tutor, Khenchen Thrangu Rinpoche.

In preparation for His Holiness’ arrival in Sarnath, the monks of Vajra Vidya decorated the road leading to the monastery with white chalk, drawing auspicious signs of welcome. Long before His Holiness’ flight had even landed at the airport in Varanasi, the abbots and monks donned their ceremonial robes, and began rehearsing their instruments.

As the car carrying the Gyalwang Karmapa reached the road leading to the noanstery’s gates, a golden procession of monastics wearing their best brocade played a musical welcome and solemnly escorted His Holiness forward. By the time the procession had reached the main assembly hall of the monastery, many hundreds of disciples had gathered. Among those jostling for a glimpse of their revered guru were hundreds from across the Himalayan region, as well as Tibetans and international disciples.

Upon arrival, the Gyalwang Karmapa paid homage at the central image of Vajra Vidya’s shrine hall: Shakyamuni Buddha, as befits this monastery, located at the site of Lord Buddha’s first Dharma teaching.