Free Medical Camp for the Disabled: The Gyalwang Karmapa’s Parting Gift to the People of Gaya 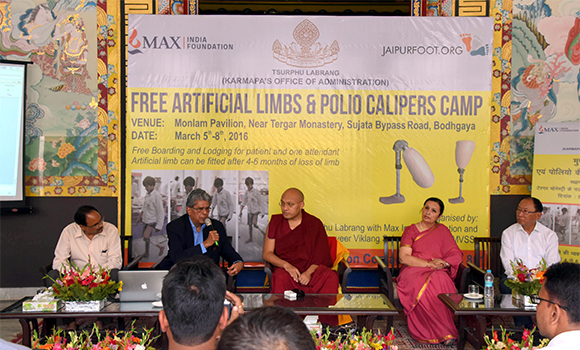 On the morning of March 8, His Holiness the Karmapa walked from Tergar over to the Pavilion where he met with Padma Shri V. R. Metha(Executive President of BMVSS) and Ms. Mohini Daljeet Singh( CEO of Max India Foundation). Together they toured the virtual facility room by room with V.R. Metha explaining to the Karmapa the process of assessing the patients, making a Plaster of Paris cast for the artificial leg, and how that becomes a basis for the artificial limb. They also stopped by the supply room where crutches, special shoes, tricycles with seats (almost 80 were given out), and wheelchairs (close to twenty were needed) were stored.

After warmly welcoming everyone, HH the Karmapa said that at a site so sacred to Buddhists, he was grateful to have this medical camp to serve the local people, and that it could not have happened without the support of Max Foundation and Jaipur Foot. He also extended his gratitude to all who had volunteered their services and expressed the hope that in the future they would be able to work together again to bring happiness and well-being to the people of the Gaya area.

Approaching the end of his three-month winter program in Bodhgaya, the Gyalwang Karmapa launched his final social initiative, a camp to provide artificial limbs and special braces for polio sufferers in the Gaya district from March 5 to 9, 2016. Held in partnership with Jaipur Foot, a branch of the NGO Bhagwan Mahaveer Viklang Sahayata Samiti (BMVSS) and Max India Foundation, the social service arm of the Max Group of Companies, the camp is estimated to have benefitted around 500 persons.

Padma Shri V. R. Mehta Executive President, BMVSS, led their team at the camp. In partnership with Stanford University, BMVSS has developed a special knee joint that allows for ease of movement and they are now working on an artificial hand. The organization follows an open-door policy that welcomes anyone with a disability, without any discrimination, cutting across geographical, social, religious, and gender bias. The NGO has benefited about one and a half million disabled in India and also held camps for the disabled in 27 countries of Asia, Africa, and Latin America.

Last year, in partnership with the Kagyu Monlam Trust, Max India Foundation under the guidance of its CEO, Ms. Mohini Daljeet Singh, conducted a multi-specialty health camp at Bodhgaya benefitting 1,785 people. The Foundation has won several awards including the Golden Peacock Award four times for Corporate Social Responsibility and has benefitted almost 1,600,000 underprivileged persons in partnership with 326 NGOs in 385 locations.

This year the Foundation returned to work with Jaipur Foot on this special camp. Employees from Max Financial Services (Max Life Insurance) office at Gaya, helped with the organization of the camp and contributed to the cost of artificial limbs and braces being provided. It has in the past conducted eight annual camps with BMVSS benefitting about 3,000 people.

The camp itself was held at the Kagyu Monlam Pavilion, half of which had been transformed from a vast shrine hall into a temporary factory producing prosthetics and braces; a huge hostel where 200 people could stay while waiting for their artificial limbs and training; and a restaurant to feed those in need along with their relatives who had come to support them. Tsurphu Labrang, the Karmapa’s Office, organized all infrastructure and physical facilities for the camp including the food and board for those undergoing treatment. With their blue vests identifying them as part of the Labrang team, the monks could be seen throughout the open space, serving food, helping people with new limbs to walk, making the plaster gauze for the casts, and working in registration.

The other half of the large space of the Pavilion served as debate court and dining hall for monks attending the Winter Debates, who often continued their discussions over meals. An aerial view of the whole Pavilion would show the two main concerns of the Mahayana path–wisdom and compassion in action.

There were many touching stories from people who came for care, including twenty-five-year old Shabnam Katur from Belea, whose determination was impressive. She was born without lower legs and came to Bodh Gaya by herself, taking auto rickshaws and the train. She had studied for her BA in education from Devendra Patahk Sarvodaya College and it was one of her teachers who told her about the clinic. In the morning of her first day, she could not stand but by the evening she managed to hold herself upright for ten minutes. The next day she was practicing walking, going up and down a path between two bamboo railings while the volunteer monks gave her encouragement and support.

From Jalanbad about 64 kilometers away came Awinash Kumar, who had lost his leg in a motorbike accident at the age of 22. Hearing about the clinic, he was inspired and applied for a job in life insurance before coming to be fitted with a new leg, which will allow him to go to work easily.