The Kindness of the Dalai Lama

Despite its unfamiliarity to the West, this recognition process is by necessity a human institution, and like any other, may be benefited by the aid of such all-knowing presences as the Dalai Lamas. In particular, during the very difficult times for the people of Tibet that began in the 20th century and erupted in such suffering in the 1950s, the Karmapas and Dalai Lamas have worked hand in hand to alleviate the situation of the peoples of Tibet.

After the tragic events in 1959 in Tibet, the 16th Karmapa and the 14th Dalai Lama each played critical roles in the survival of the Tibetan culture, and cooperated on numerous projects.

1961 Rumtek
In 1961, His Holiness the 16th Gyalwang Karmapa wrote a verse that reflected a keen recognition of the importance of the role of the Dalai Lama to the people of Tibet::

[Dalai Lama,] pillar of all the Buddha’s teachings,
You are a great wish-fulfilling jewel.
Pervading the world with myriad lights,
[May you be] permanent, stable, and unchanging as a diamond
In the red palace of Lhasa on the golden throne held high by lions.

His Holiness the Dalai Lama is the supreme leader of Tibet. Moreover, In acknowledgment of the special new circumstances of His Holiness’s supreme role as leader of Tibetan Buddhists in exile after the diaspora began in earnest in 1959, when he was forced to became an in absentia leader of the people remaining in Tibet, the Dalai Lama was informed on an ongoing basis of the search for the 17th Karmapa, since His Holiness the 16th Gyalwang Karmapa passed into parinirvana in 1981.

Some of the publicly disclosed communications from and to His Holiness the Dalai Lama regarding the discovery and recognition of the Karmapa are summarized below.

March 19, 1992 Rumtek
At the meeting of the council of seatholders in March 19, 1992, the Tai Situ Rinpoche showed the letter of His Holiness the 16th Karmapa to his colleagues. By their own public accounts, all four members agreed that Jamgon Kongtrul Rinpoche would go to Tibet that summer to investigate the letter, and a public announcement about the incarnation was scheduled to be made in seven months.

All four also met later that day and the subsequent day with various representatives of the government of Sikkim and Sikkimese Buddhist organizations. At the meeting, the envelope containing the Sacred Prediction Letter was shown, and the plans for Jamgon Rinpoche to go to Tibet and the October timetable for a final resolution were announced.

March 1992 Dharamsala
Tai Situ Rinpoche visited His Holiness the Dalai Lama to explain that the letter had been discovered and that a plan had been made to find the incarnation of the 16th Karmapa. Situ Rinpoche reported that His Holiness the Dalai Lama responded that he himself had had a dream in which His Holiness found himself in a beautiful green area without trees, surrounded by low mountains and small streams. He heard the sound “Karmapa” in the air and was very happy when he woke up from this sacred vision. Gyaltsab Rinpoche later reported that the area described by His Holiness in March matched the description of the place where the Karmapa had been found.

May-June, 1992 Rumtek
His Eminence Jamgon Rinpoche passed into parinirvana on April 26, 1992, thus requiring new arrangements for finding the Karmapa. After attempting unsuccessfully to meet with Shamar Rinpoche, who left Rumtek to travel abroad during May, Tai Situ Rinpoche and Goshir Gyaltshab Rinpoche authorized Tsurphu Monastery to dispatch a search party for the Karmapa in Tibet.

June 8-9, 1992 Rumtek
After the discovery of His Holiness the 17th Karmapa and provisional confirmation by His Holiness the Dalai Lama in June of 1992, Shamar Rinpoche announced his opposition to the manner of recognition of the 17th Karmapa and that he would not accept the Sacred Testament of the 16th Karmapa unless it is subjected to forensic testing. Shamar Rinpoche’s actions are a cause of great sadness for most of the Kagyu community in Rumtek.

June 12-17, 1992 Rumtek
Tai Situ Rinpoche and Goshir Gyaltsab Rinpoche returned to Rumtek on June 12. Shamar Rinpoche continued to object to the results of the search in Tibet. After mediation by Tulku Urgyen Rinpoche, Shamar Rinpoche on June 17th published a letter in Tibetan, in which he states that in reliance on his confidential discussion with Situ Rinpoche, “I go along with the decision made by H. H. the Dalai Lama that a reincarnation has certainly been found as reincarnation of H. H. the Gyalwa Karmapa. Hence, I suspend my demands such as having the handwritten prediction letter being subject to a (forensic) test.” Tulku Urgyen Rinpoche signed the letter as a witness. [Authorized translation of Shamar Rinpoche letter of June 17, 1992]

His Holiness the Dalai Lama officially conferrs the Buktham Rinpoche and presents it to Tai Situ Rinpoche and Goshir Gyaltsab Rinpoche, and also gives some words of advice: 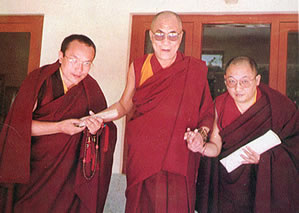 Brief Advice from His Holiness the Dalai Lama
It is mainly Situ Rinpoche along with Tshurphu Gyaltsap Rinpoche and those closely connected, who are responsible for finding the reincarnation of the XVlth Gyalwang Karmapa, and I am very happy about this. The Gyalwa Karmapa is a supreme master of Buddhist teachings in general, a magnificent lama of Tibet, and in particular of the Kagyü tradition’s Karma Kamtsang lineage. To have found his reincarnation, therefore, is a great benefit for Buddhism in general and for the Kagyu lineage in particular, and so I am very happy.

In Tibetan, there is a proverb that says where there is great Dharma, there is immense Mara, and so there has been a little disharmony and some difficult situations, but these do not have great importance. What is important, is the focus on what has real and profound significance. Until now you have worked, keeping in mind what is most important and essential, and you should continue to focus on what is vital, what is crucial.

In the world today, many people have an active interest in Buddhists teachings in general, and especially in eastern philosophy, and particularly, in the teachings of Tibetan Buddhism, which bring together the sutra and tantra traditions. In the future, there will be more people who have this interest. The activities of the previous XVlth Gyalwa Karmapa were most successful; he planted the roots of Dharma and the Buddha’s teachings generally flourished. At such a time we Buddhists who follow the same teacher, Shakyamuni Buddha, and count ourselves his disciples, should continuously maintain pure vision and serve the teachings well, so that numberless sentient beings may always enjoy the source of happiness.

We usually pray that the teachings will help all sentient beings; if this is not immediately possible, then at least we can help those on this earth, and especially human beings. This is very important, and so everyone should do whatever possible not to harm others and to travel the noble path of peace. I pray that this precious reincarnation will have a long life and that his activity, as that of the previous incarnation of the Gyalwa Karmapa, will flourish for the benefit of the teachings and sentient beings. Whatever his wishes are, may they be spontaneously accomplished. I wish you all Tashi Delek.

July 23, 1992
The Central Tibetan Administration of the HH the Dalai Lama issues a specific summary of events leading up to the issuance of the Buktham Rinpoche granted to the 17th Karmapa.

The letter concludes: “Thus, His Holiness the Dalai Lama granted his final seal of approval and recognition to the 17th Gyalwa Karmapa. not randomly or hastily for any reason, but after satisfying himself by means of hearing a series of reports from all those concerned; studying and paying due consideration to the overall matter; and reconfirming the final indications with exclusive traditional examinations.” [Special Notice from Office of HH Dalai Lama]