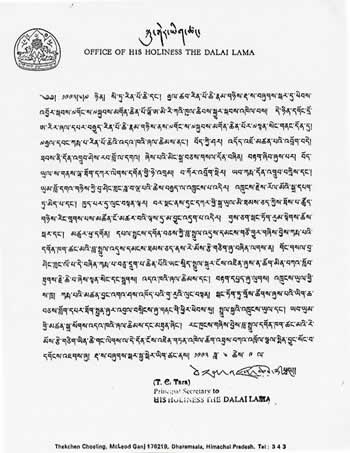 On the 7th of June, 1992, when Situ Rinpoche and Gyaltsap Rinpoche arrived in Dharamsala, His Holiness the Dalai Lama was on a visit to South America. On the evening of that same day, the two Rinpoches telephoned His Holiness to inform him of the following.

“In His Holiness the Gyalwang Karmapa’s Dakhaishalcham [sacred letter disclosing his reincarnation], it is said: ‘In the east of Tibet, a nomad community with the sign of cow, the method is Dondrub and the wisdom is Lolaga.’ With this clear description of the names, a thorough search was made, and in the nomad community named Bakor, in the Lhathok region of eastern Tibet, on the eighth day of the fifth Tibetan month in the wood ox year, a boy was born whose father was Karma Dondrub Tashi and mother, Loga. After his birth, there were many wondrous signs, such as the infinite sound of music and, according the to prophesy, the sound of the conch shell reverberated throughout space for about two hours and was heard by all the people of the area.

“The Tulkus, lamas, and sangha residing both inside and outside Tibet, from Gangtok Rumtek’s place of Dharma, Tshurphu Monastery, and Palpung Monastery, and from all the Karmapa’s monasteries requested with one-pointed devotion and aspiration, the compassionate advice for whether it would be appropriate or not to recognize this boy of the wood ox year, described above, as the reincarnation of the XVlth Karmapa.”

This request was offered along with additional information including the sacred letter, the way the search and examination was carried out, a drawing of the birthplace, Guru Rinpoche’s prophesy containing a list with some of the Karmapa’s names, and a letter regarding the meeting and discussions in Gangtok.

All these were sent by fax to His Holiness and He granted this reply: “The birthplace of the reincarnation, the names of the mother and father, and so forth, are in agreement with the sacred letter. It is very good that inside and outside Tibet, Tulkus, lamas, and the monasteries belonging to the lineage, are all one-pointed in their devotion and aspiration. It is appropriate to recognize and confirm following what was stated above.”

This command has been granted and received. May it be known.