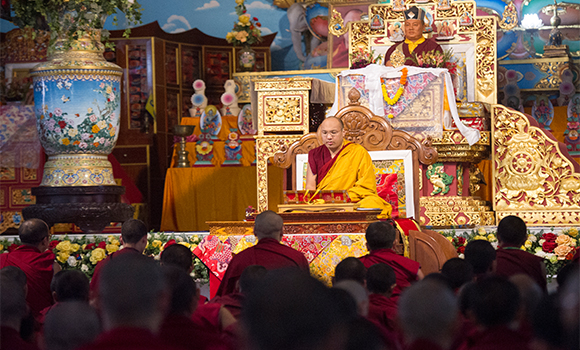 The Gyalwang Karmapa completed the transmission of the chapter on Vast and Profound Light: Instructions on the Two Types of Bodhichitta According to the Founders of the Two Traditions by reading Mikyo Dorje’s post meditation instructions.

First come instructions on taking adversity into the path.

Next come instructions on training in bodhichitta, in the four activities. In other words, use whatever you are doing as a method for developing bodhichitta. Think that all the forms you see are forms of Chenresig [Avalokiteshvara]. All the sounds you hear are the sounds of the six syllable mantra [Om mani padme hum]. Meditate on devotion until all appearances become pure.

The chapter concludes with instructions on what to do at the time of death.

Transfer your consciousness at the time of death using the four powers–the seed, aspiration, resolve and habituation. The power of the seed is the state of the consciousness at the moment of death, so offer up all your possessions. Make the aspiration to develop bodhichitta. Resolve to give up all self-cherishing and work only for the benefit of others. Train in great compassion.

When you die, sit in the vajra posture if you can, otherwise lie on your right side in the lion posture. Visualise your lama at the centre of a pure realm, inseparable from Amitabha, and rest in mahamudra.

Details of the Muni Trisamayavyuha Initiation

Before the Monlam the Karmapa will bestow the blessing empowerments of the 24 peaceful deities of the 9th Karmapa Wangchuk Dorje’s ‘Knowing One Frees All’. His Holiness explained that this was the first time he had ever given an extended set of initiations.

Usually, before receiving an initiation, the supplicants need a tantric empowerment. The deities in the ‘Knowing One Frees All’ are mainly from the kriya [action] and carya [conduct] tantras. There are three kriya tantra families, Tathagata, Lotus and Vajra. The Tathagata family is the highest, so covers empowerments in the other kriya families. For this reason, on the morning of 20th December His Holiness the Sakya Trizin will give the empowerment from this family, the Muni Trisamayavyuha.

There are several reasons for requesting His Holiness the Sakya Trizin to bestow the empowerment. Firstly, this tantra has come down to us in the Sakya tradition. Secondly, Sakya Trizin is a highly-respected master and practitioner. Thirdly, from accounts of the life of the Sixteenth Karmapa, it is clear that Rigpe Dorje felt very close to the young Sakya Trizin and tried to nurture him during the early years of their exile in India.

From a different perspective, inviting Sakya Trizin counters the sectarian bias that sometimes exists in the Kagyu.

The Karmapa turned his attention once more to the monks and gave advice on correct attitude and behavior.

The Kagyu forefathers said that listening, contemplation and meditation are the way to tame a rough and unruly mind, the Karmapa told them. Tibetan nomads have a way to make yak hide supple. First they steep it in water, then they rub butter into it, then they rub it again and again with their hands. Likewise, for our minds, listening is like the water, contemplation is like the butter, and meditation is like rubbing the hide again and again. The result should be that our minds become less rough and suppler. If our minds are becoming tamer and more malleable, it is a sign that our listening, contemplation and meditation is being done effectively.

Shedra studies need to be based on an unmistaken motivation and resolve from the beginning. Hearing even a single word of Dharma should help to decrease afflictions and increase pure perceptions.

The Karmapa also had a few words for the laypeople who had attended the teachings. He said how happy he was that they had come, even though it felt to him as if they had been short-changed, as the main emphases of the teaching was for the monks.

“It encourages me and makes me feel like I have support,” he said and thanked them.