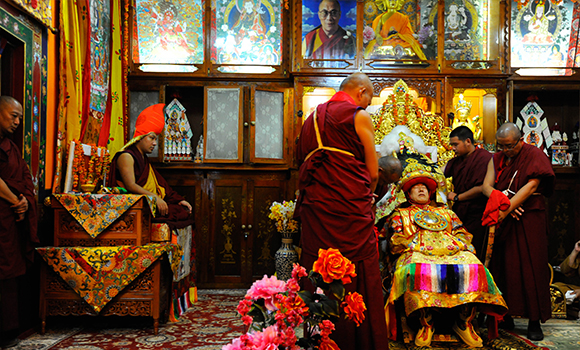 July 18, 2016 – Dharamsala, India
According to Tibetan tradition, Guru Rinpoche (Padmasambhava) was born on a lotus in Dhanakosha Lake on the tenth day of the monkey (fifth) month in Year of the Monkey. This reappears every twelve years in the Tibetan Calendar, and the western year of 2016 is a Fire-Monkey Year. To celebrate this special occasion, Nechung Monastery under the guidance of Nechung Kuten (Oracle) and Nechung Choktrul Rinpoche has organized two celebrations during this month of the monkey. The first took place at Rewalsar (Tso Pema in Tibetan), another lake linked to Guru Rinpoche. Here, on July 13 and 14, 2016, HH the Dalai Lama presided over two days of ceremonies, which included teachings, ritual practice, and a particular focus on the oracles present for the occasion.

Continuing the celebration, HH the Gyalwang Karmapa was invited to preside over ceremonies at Dharamsala’s Nechung Monastery on July 18, 2016. The walls of its warm golden and red-hued temple are covered in large thangkas. For today’s occasion, the monks had set up a shrine filled with copious offerings and a central throne draped with garlands of marigolds for the Karmapa. His throne faced a statue of the Buddha and to the Karmapa’s right, resided a radiant statue of Guru Rinpoche. The Karmapa arrived around 7 o’clock and was welcomed with a formal procession of monks carrying brilliant brocade banners. They were led by Nechung Kuten and Nechung Rinpoche as well as the Vajracharya and Discipline Master of Nechung Monastery.

Entering the main shrine hall, the Karmapa made three bows to the Dalai Lama’s throne and offered a khata as well as making offerings to the statue of Guru Rinpoche. Once seated on his throne, the Karmapa was presented with the traditional offerings for long life—a mandala and the representations of body, speech, and mind—by the two main lamas and the most senior monk of Nechung Monastery. Soon after commenced the ritual of the inner practice of Lama Rigdzin Dung Drub that belongs to the Northern Terma tradition of the Nyingma school. Focused on Guru Rinpoche, this profound text beautifully evokes the primordially pure nature of mind.

During a break, the shrine hall was prepared for the Nechung Kuten to enter trance. In the center of the shrine stage, a wide rug in a tiger skin pattern was laid out and a seat placed upon it for the Nechung Kuten. The Karmapa’s throne was moved to stage right to face the oracle, and monks below formed a semi-circle of musicians with cymbals, thighbone horns, and drums. Two gold and silver long horns (radung) were lifted aloft on a carved frame while the center of the floor was left empty. On stage left sat representatives of the three pillars of the Central Tibetan Administration: the Chief Justice Minister Kagyu Dondrup from the Supreme Justice Commission for the judicial; Sikyong Dr. Lobsang Sangay for the executive; and the Deputy Speaker of the Parliament, Acharya Yeshe Phuntsok, for the legislative. Also participating were Ministers and Secretaries of different Departments of the CTA, members of the standing committee of the Tibetan Parliament, representatives from the CTA and from diverse NGOs.

The Karmapa entered to take his place, and soon the Nechung Kuten came to the center of the shrine where he was dressed in his ceremonial robes and an immense headdress topped with three plumes of white fur surrounding a radiant jewel fashioned in gold. For this ceremony, the Karmapa wore the bright red hat of a pandita. For a long while the monks were chanting in low voices, occasionally broken by a drumbeat or short roll of the cymbals; finally the Oracle entered into trance and with a bow forward came up to standing. Vocalizing in a high pitch, he moved toward the Karmapa and their heads remained together for a long time as the music continued and the Oracle spoke.

Still in trance the Oracle returned to his seat, and everyone present, beginning with the Sikyong, came for his blessing. After everyone had passed in front of him and received a handful of blessed, orange-colored grains, the Oracle moved outside to the veranda where a large table was filled high with offerings. He sat in front, offered a red and white torma, and then called for the Guru Rinpoche statue to be brought forward. While the Karmapa remained inside on his throne, the Oracle carrying a long incense holder led the statue of Guru Rinpoche in a circumambulation of the temple. When he returned inside, the Oracle offered the Karmapa a long khata and returned to the center of the shrine where the monks carefully removed his headdress and ceremonial robes before carrying him away.

This significant and moving celebration of Guru Rinpoche’s birth concluded with luncheon for everyone present. Afterward the Karmapa went up the steps up to the Library of Tibetan Works and Archives next door to Nechung Monastery and paid one of his many visits before returning to his temporary residence at Gyuto Monastery.