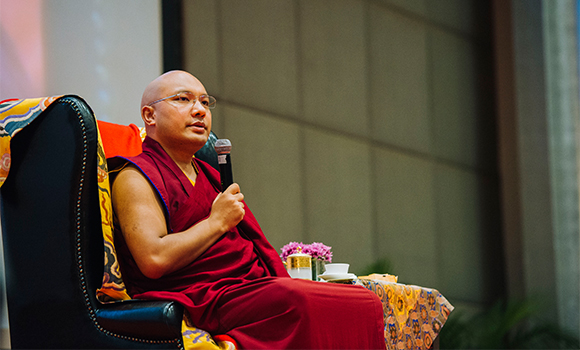 August 18, 2016 – Gurgaon, India
The last afternoon of the Heart Sutra teachings saw a celebration of the entire seminar. The hundreds of low meditation tables in the hall had been set with a plate of the famous Taiwanese pineapple cake and a cup of renowned high mountain tea, both of which had been brought from Taiwan to India.

After His Holiness entered the hall and took his seat on the stage, the event began with twenty people taking three minutes each to share their experience of the seminar. Standing near the stage where the Karmapa sat in a high backed chair, and facing hundreds of people, they passed the microphone from one to the other and spoke of how they had been touched by the Karmapa’s presence, by his teaching so clearly and directly in Mandarin, and by the profound words of the sutra. Some people cried and the audience, which had paid rapt attention to all the stories, responded by clapping to give them support to finish their story.

These stories were followed by a male singer and a female musician playing the Chinese lute. They performed a version of the Heart Sutra, and then the Dalai Lama’s long life prayer for the Karmapa, which appeared in Chinese on the large screen behind them so that everyone could participate.

Ani Miao Rong then introduced a slide show so that people could see what the organizers were doing behind the scenes. It also presented many images of the Karmapa as he taught and of the disciples as they listened to the teachings and shared this time together.

Afterward the Karmapa was invited to speak. He began:

Last year after the Monlam, I had the thought that I’d like to teach the Heart Sutra and do it in Mandarin. So I told Khenpo Tengye and Ani Miao Rong, and asked them and Hwa Yue Foundation to organize this course. The final decision was made merely 5-7 months ago. In giving the teachings, I have tried my best and really hope that they have inspired and benefitted you.

At this time, I feel very grateful that when I was young, the government had arranged for some teachers to come and teach me Chinese…. I am deeply grateful to my Chinese teachers since, due to their hard work, I am able to teach the Dharma in Mandarin, so I’d like to take this opportunity to thank my teachers.

The Karmapa spoke eloquently of his relationship to China:

In my heart I have a deep feeling that in the past I had a very deep connection with China. In my mind, sometimes there appear some of the old places I have lived in… and I can even smell it.

I’m deeply grateful to all of the past Karmapas, because I feel that who I am now and my connection with the Chinese disciples today, it is not due to myself but to the past Karmapas and their compassion. And now I feel a lot of gratitude to them, especially the second Karmapa, because he dreamt of Chienbo Wenshu (Thousand Bowl Manjushri) who gave him this prophecy: “In the future you should make everywhere in the east your land.

With such a prophecy, I feel that the Karmapa has made many aspirations, especially the fifth Karmapa. Perhaps during his time is when the Han Chinese truly made a connection with Tibetan Buddhism. It is said that it started with the fifth Karmapa. No matter what, this time around, I am grateful to all of the past Karmapas who gave me this opportunity to be able to connect with you and spread the Dharma in Mandarin. Thank you.

After the applause subsided, the Karmapa continued:

Since the teachings were given in Mandarin, we had to prepare the subject matter ahead of time, and this has to be done well. We were lucky to have had a group of great masters to help: Yang Ting Tulku, Geshe Rinchen Ngodup, Khenpo Lodro Tenzin, Lodro Rinchen, and Ani Miao Rong. I’d like to thank them for helping me.

He continued with his thanks:

From a young age, I have met many great lamas and received their teachings and their compassion, and have also been supported by so many Dharma brothers, sisters, and friends. I feel that due to them, I have been able to get to where I am today. It was not easy, so I would like to thank all these lamas and all these friends.

In this lifetime I feel very honored that I’ve been able to learn Mandarin and feel that I can use it and also learn more languages so that in every lifetime I will be able to speak more beneficial things to all of you. Thank you everyone, thank you.

Ani Miao Rong then offered her remarks saying that now everyone who has had the opportunity to listen to the Karmapa’s teachings, should pray that His Holiness will be able to give us teachings every year and to teach in Mandarin to benefit his Chinese disciples. Three representatives of the organizers then made offerings to the Karmapa and the ordained Sangha. And for the final event, the Karmapa came down from the stage and passed among all the rows of participants giving each one a scroll of the Heart Sutra that he had calligraphed, which was printed in gold—a perfect ending to a perfect teaching.