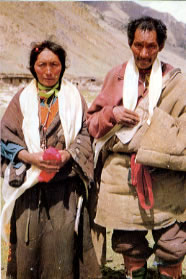 When the advance search party arrived in the eastern region of Tibet called Lhatok, they discovered that that the birthplace and birthdate of a child living there matched the details in the sacred prediction letter of the 16th Karmapa. When asked, the parents told of their son’s birth, special signs, dreams of the mother, father and siblings, of a special bird heralding the birth, of the sound of a conch shell after the birth, and other events. In fact, the advance party had already independently confirmed most of these events through conversations with other nomads of the camp. The early years of this young nomad, who was then called by the nickname of Apo Gaga, fulfilled all the predictions of the sacred testament of the 16th Gyalwang Karmapa.

The Seventeenth Gyalwang Karmapa was born in the nomad community of Bakor, eastern Tibet, on the eighth day of the fifth Tibetan month, year of the Wood Ox (June 26, 1985). His father is Karma Döndrub and mother is Loga. He has six sisters and three brothers. The village in which he was born had about 72 nomadic families, comprising about 430 people.

Born into the Nomadic Life

The birth occurred without any difficulty for his mother. The circumstances of his birth were full of auspicious portents, but since he would not be identified as the Karmapa for many years, he was called Apo Gaga, which means “happy brother,” a nickname given to him by his sister.

Before he was born, his mother had a number of auspicious dreams, such as three white cranes offering her a bowl of yogurt. A beautiful bird, of a type not commonly seen, landed on the roof of his family’s tent and sang a lovely song. At another time, a rainbow appeared over the tent.

“[With] the miraculous, far-reaching sound of the white one;
[This] is the one known as Karmapa. ”

In the afternoon of the third day after his birth, the sound of a conch shell resonated throughout the valley for about one hour. For another half hour, the tones of various musical instruments were clearly heard by all the people in this nomad community. Flowers grew that had not been seen in the area before.

One day when he was playing with his youngest sister, he said “Father’s car has fallen down.” When his sister told him not to speak in that way, His Holiness answered, “Everything is all right.” Later the Karmapa’s father came back and they discovered that his father’s vehicle had indeed fallen off the side of the road. Fortunately, no one was hurt.

The young Karmapa was treated with great respect by his parents and the Karmapa demonstrated remarkable gifts. Yet His Holiness felt that any such gifts were not evidence of any supernatural power in him, but only the manifestation of the teachings of the Buddha and the accomplishment of the previous Karmapas. Though many wonderful signs appeared during his life, he thought it would be disrespectful for someone to believe himself to be the Karmapa, prior to the arrival of an official search party. Hence, during his childhood in eastern Tibet, His Holiness thought of himself “as a human being, not as the Karmapa”; as far as he was concerned, he was like many other boys his age.

The Karmapa and his family lived very simply, residing in tents and moving their location from season to season, subsisting on a staple diet of butter, meat and milk. Winters were bitingly cold. It was an extremely isolated and natural environment, and the people living there had a very strong faith in Buddhism.

As was very common in Tibet, the Karmapa entered a monastery at a young age. Before the birth of His Holiness, his parents had consulted Thogden Amdo Palden Rinpoche, from Kalek Monastery, about having another child, and had asked him for his prayers. Because of that preexisting connection, Palden Rinpoche eventually took responsibility for educating the young Karmapa. At Kalek monastery, the Karmapa involved himself in the intensive study and practice of Buddhism. He was treated as a reincarnation, but he was not identified as the Karmapa or any specific tulku.

In 1992, the seven-year-old Karmapa, then unrecognized, left Kalek Monastery to spend some time with his family. Upon arrival at his home, he asked his family to move the location of their nomadic home to the summer pasture a month early. Somewhat mysteriously, he had told his parents to expect a visit from traveling monks. Putting some clothes on the back of his special pet goat, he said, “Now I am ready to go to my monastery. It would be a good idea to take a few gifts from Kalek Monastery with me.” Thus the search party discovered the Karmapa in Bakor, the name of which carries the sign of the cow.

After satisfying themselves that the life of the young nomad matched the details of the prediction letter of the 16th Karmapa, the head of the advance search team, Lama Domo, provided the Karmapa’s father a copy of the Sixteenth Karmapa’s prediction. It was then that Döndrub realised who exactly his son was. After joyful celebrations by the family, the monastic party then accompanied the young Karmapa to Kalek monastery to await the arrival of Akong Tulku Rinpoche and Sherab Tarchin.

Shortly thereafter, three suns were seen in the sky. They were the same size and arrayed in a row. A rainbow over the middle sun dissolved into the flanking suns. This phenomenon was reported throughout Eastern Tibet.