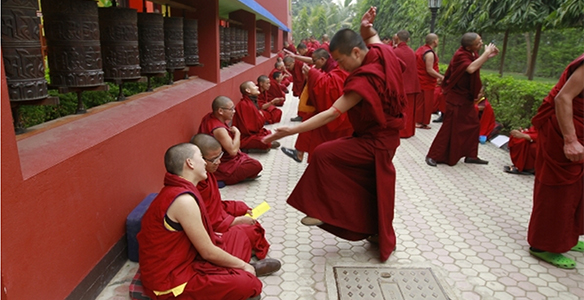 The 17th Kagyu Gunchö (Winter Dharma Gathering) will be held at Tergar Monastery in Bodhgaya again from December 3, 2013, to January 1, 2014. During the event, monks from more than ten Kagyu shedras (monastic colleges) will gather for a month of teachings, debate, study, and discussion. The main topics for debate will be the Intermediate Collected Topics (Düdra), the Types of Cognition (Lorik), and Types of Reasons (Takrik). As at the last Kagyu Gunchö, there will be a competition among the different shedras. The finals of the competition will be held on December 28.

During the Gunchö, His Holiness the Gyalwang Karmapa will also continue the transmission and teaching of the Hundred Short Instructions by the Eighth Karmapa Mikyö Dorje, resuming where he left off last year.

A special feature of this year’s program is the introduction of three debates on Madhyamaka philosophy. They will be held on December 10, December 18, and December 27. These debates will be not be held in the traditional Tibetan style but will also incorporate elements from contemporary debating practices.

The Gunchö will close with a four-day conference on Madhyamika from December 29 to January 1. Topics to be discussed will include:

For the monks in Kagyu shedras, the Gunchö has always been a opportunity to deepen their understanding, gain new insights, and make contacts with monks in other monasteries in addition to receiving teachings from great masters such as His Holiness the Karmapa. For many, it is the highlight of the year.