The vision of Chogyur Dechen Lingpa (1829-1870), a great nonsectarian master and tertön was recorded in two forms. Chogyur Lingpa’s oral recounting of his vision about the 17th Karmapa was set down by his disciples was recorded in a text called Sounding the Tones of the Melody of Auspiciousness.

Under a verdant tree,
on a rocky mountain
is the seventeenth incarnation
with Khentin Tai Situpa.

Through the inseparability of their minds,
the tree of the Buddha’s teachings
will flourish and bear abundant fruit,
the very essence of transmissions from Gampopa.

In addition, Chogyur Dechen Lingpa explicitly described his vision of the prophecy to Karmai Khenchen Rinchen Tarjay, Supreme Abbot of Karma Monastery, who instructed artists to render the vision in painted murals.

Below is an excerpt of the section of the mural concerning the 17th Karmapa: 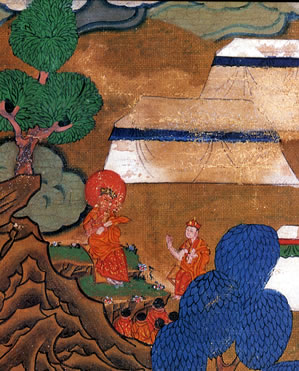 Excerpt from a thangka of the vision of the great tertön Chogyur Dechen Lingpa, who through a vision of Guru Rinpoche foresaw details of the future lives of the Karmapas.